In 2012, KEYS was nominated for and received the Business, Community and Agency Award at the Provincial level. The award was presented at the annual conference of the Council for Exceptional children in Niagara Falls on November 30. On March 1, 2013, two members of the Council for Exceptional Children attended the KEYS Community Lunch and presented the award to President Helene Paulyn-Murray, vice-President Maryanne Bruni, KEYS Coordinator Jenny Saundercook, and the KEYS participants. 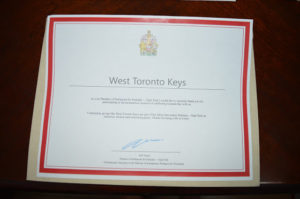 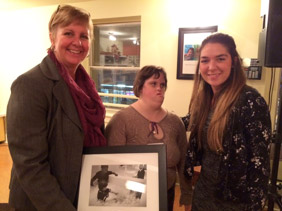 Safehaven’s Catherine Zoe Whittaker Award
West Toronto KEYS to Inclusion was the recipient of this award in October 2015.

“We cannot think of a more deserving recipient than KEYS-your commitment has gone above and beyond what anyone would ever expect on our behalf. KEYS, has been a great asset to Safehaven.  We also value the opportunities that you’ve created for your participants to include Safehaven in your mission to heighten the tone of integration and interaction within your community. We really appreciate your time, support and volunteer efforts. The children, staff and families at Safehaven truly value this partnership and most especially, friendship. You are a wonderful organization and continue to lead by example and inspire each of us! Dreams come true, thanks to volunteers like YOU!”